The Tale of Two Portraits Part 2

Before I ever opened my first art gallery, a close friend introduced me to Ken Kinsley’s artwork. I can remember her unrolling canvases, on the floor of my shop, for me to see. Ken mainly worked in oil and was known for his vibrant colors and heavy texture. His Diner Series, received an excellent review from our local art critic, Clara Hieronymus. I fell in love with his work, and once we finally met, felt the same about him. I treasured his friendship. 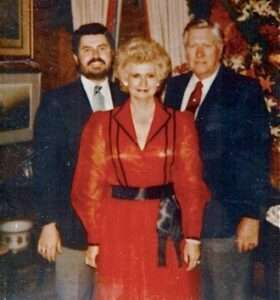 Before I opened my first “official” gallery, I would do the occasional art show in my former second floor apartment above our Christmas store, the Mistletoe Shop. I called the space, The Upstairs Gallery, and Ken was one of the few artists I offered a solo exhibition. For that show, he had a wonderful collection of unframed figure drawings on paper, several of which, had angel wings. In fact, Ken was one of the first local artists to paint angels, long before the craze began. He had begun working part-time in our shop, and may have been influenced by the multiple rooms of Christmas inventory.

I continued to represent Ken, when I opened my gallery across the street. This enabled me to place his work in the homes of many of my design clients. Being very adept at figures, Ken suggested I promote his portrait commissions, as well.

One of the first commissions I sold was to my dear friend, Debbie Pitts. We had met through church, where she and her husband attended the Sunday School class my parents’ taught for young married couples. Debbie was artistic, creative, inventive and always eager to learn. And she believed in me. One day, when we were having lunch, I shared with her my desire to open an art gallery showcasing local artists. Without hesitation, she pulled out her checkbook and asked how much it would take to make that happen. She then proceeded to write a check for twice that amount! Construction began and before long, the gallery was open. I represented 30 local artists including my dear benefactor’s pottery, artwork and hand-painted tuxedo jackets.

Debbie then hired me to design an addition to their home as well as, redecorate the interior. When she mentioned wanting a portrait – I brought Ken to her home, where he took out his pencil and pad and drew sketches that would be the basis for the portrait. Debbie, and her young daughter, sat on the sofa reading a book together. Like me, she fell in love with Ken’s gentle personality and amazing talent. She was very pleased by the finished portrait, which became the focal point of her newly redecorated room. We lost Debbie several years ago to an unforgiving disease, and to this day, I still miss her sweet smile and the way she could light up a room. 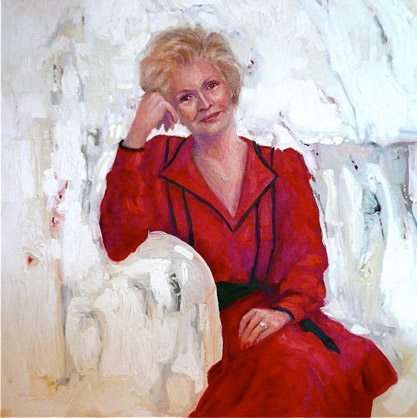 Ken suggested painting a portrait of me, that could be used as a sample of his work. I told him, that by the time he made me look thinner, younger and darkened my hair, like I saw myself in my imagination, no one would think he had skill because it would not look like the real me. Ken had not met my mother, but he had seen my photos capturing her beauty. He asked me if it would be okay if he painted her instead. I loved the idea and proceeded to gathered my photos, once again, for another portrait.

I gave an anniversary party for my parents, the year before my mother was struck with cancer, and had picked out the striking red dress that she wore. I asked Ken to paint her wearing that dress, with “the” diamond necklace. From the assorted photos as well as, through my eyes, he was able to capture my mother’s beauty, inside and out.

My dad’s birthday fell on November 3 and my mother’s, November 4. As long as I could remember, they had celebrated together. I knew this birthday, without her, would be difficult for him, so I decided to throw a party and invite close friends. Ken was able to finish the portrait just in time for me to have it on view the night of the party. Women openly wept when they saw the painting and remarked how it looked as if she could speak. It was a bittersweet moment for my dad, but a blessing, as well.

*After my mother passed away, we donated her clothing, with the exception of the red dress in this portrait. My father took comfort in it continuing to hang, in her empty closet, until his death.

*My father and I, after my mother’s passing, would have Christmas eve dinner at the home of our dear friends, Jean & Bill Davis. In the middle of dinner, someone rang their doorbell – my dad said it was for him and quickly went to open the door. We all knew better than to question his actions. The following morning, as he and I sat by our Christmas tree, opening presents, I opened a box that took my breath away. He had taken my mother’s diamond necklace – made into a ring for me – which the jeweler delivered on Christmas eve. As stunning as the ring was, it was the fact that it had been her necklace, along with his thoughtful surprise, that meant the world to me. Months later, on a hot summer day, while I was at work, someone broke into my West End condominium. I had not worn my ring that day, and because of the robbery, I would never have the chance again.