A workaholic is a person who works compulsively. While the term generally implies that the person enjoys their work, it can also alternately imply that they simply feel compelled to do it.  —Wikipedia

Hi. My name is Ron and I’m a workaholic. I’m not sure how it all began but if I were to guess, I would think it was somewhere in the 1980s when I worked six days a week in our family’s Christmas store and led music at a small mission church on Sundays. But even then, I took vacations, hosted parties, went to the gym and enjoyed the occasional day off.

Jobs changed and overlapped through the years but the hours stayed pretty much the same. As I focused on my interior design business, I was afforded the luxury of having access to several clients’ beach homes. I can even remember one year when I took two weeks off to celebrate my 40th birthday on Sanibel Island. Now that seems so extravagant! 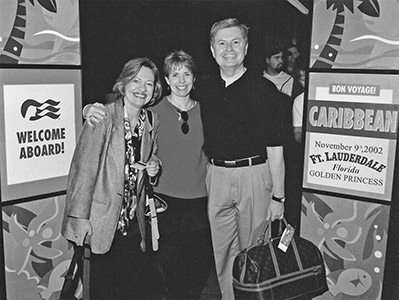 When my 50th birthday came along, I enjoyed a week-long Caribbean cruise with two dear friends from college. However by that point, vacations were becoming fewer and fewer and my social events more business or charity oriented.

The last vacation I took was for my 60th birthday more than 5 years ago and even that was for only three days. How did this happen? I can remember going to movies and taking days off just to do something fun. But now, I just work. It feels as if it happened gradually – as one thing after another disappeared from my life.

A year or so ago, I dismissed the cleaning crew that had kept my home straight while I worked. They kept moving my appointment time and their industrial-strength vacuuming had left my carpet rippled. I thought that surely, I could clean my own house. And I did, for a few months. But then, clothes did not find their way back into the closet. Dishes sat by the sink instead of going back into the cabinets. And dust bunnies multiplied while cat hair floated in the air. It appeared that I had perfected the art of living with blinders on.

Recently I noticed that Christmas wrapping paper and ribbon was still on my dining room table – five months passed the holiday. A program from a musical production three months earlier had not been moved from where I had placed it on my kitchen counter. Stacks of magazines, mail and assorted other things had expanded into several piles circling the chair where I sit to watch TV. And speaking of TV, I have so many shows recorded to watch as well as, stacks of books to read but unable to find the time.

For the last several months I have pulled out of my garage and headed to work three hours before my gallery opened even though I have help quite capable of managing that chore without me. And I can be found at the gallery during regular hours 5 days a week as well as, closed days as well.

So yes, I have become a workaholic. Slowly but surely I have given up this or that and now I wonder if I am even capable of cutting back and easing into a life again. Could I find the time to take in a movie, read a book or even clean my home? Bottom line, I love what I do so it doesn’t feel like work. (most of the time)  And yet, for my own health and sanity, I know that I need to let go of a thing or two before life passes me by.