The Tale of Two Portraits Part 1

I attended an art opening in 1984, for portrait artist, Goode P. Davis. His work was exquisite and I immediately knew I wanted him to paint a portrait of my mother, who diagnosed with cancer, was undergoing treatment. Even the price for one of his smaller paintings was out of my budget, but I did not let that stop me. I had enough for the 50% down payment and knew I could come up with the rest, once it was completed.

I learned that he had designed the magnificent stained-glass windows illuminating the sanctuary of First Baptist – my church home since age four. The windows, colorful and abstract, are polar opposite to his traditional portraits in oil. 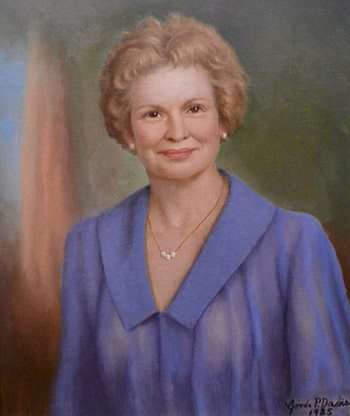 Meeting with him at his home studio, I gave him photographs of my beautiful mother and asked that he paint her in the blue dress worn in one of the photos. I wanted a coral background and have her wearing the diamond necklace my father had designed. The simple necklace consisted of three one-carat diamonds, symbolizing my mother, father and me. Mr. Davis, 79 years old and a bit ornery, assured me he had what he needed, so I left him to work his magic.

A few weeks later, he called to ask when my mother might sit for him. I reminded him that she was quite ill and that would not be possible. He became angry with me and repeated that he needed her to come to his studio. I replied, saying once again, that it could not, and would not happen. He hung up on me.

Speaking with the people that had initially made the introduction, I was promised they would talk with him. The following week, he called asking me to stop by to see the progress and requested I bring her diamond necklace with me. Since I had not mentioned anything to my parents about the portrait, I found myself sneaking the jewelry out of the house and taking it to Mr. Davis. He insisted I leave the necklace with him for reference – which I did, after realizing I had no choice.

I did not have quite enough pay off the balance when he called to say the portrait was complete, so I asked if I could go ahead and pick up her necklace, give him a partial payment, and the final payment in two weeks. He became very upset with me and said he would just go ahead and paint over the portrait if I didn’t come right away with the payment, adding that he wasn’t even sure where he had put the necklace. Needless to say, I was on the verge of a total meltdown with my mother’s health deteriorating, the thought of losing the portrait and his lack of concern for the missing 3-carat diamond necklace. Devastated and emotional, I told a family friend of the situation, who in turn, loaned me enough to pay off the balance. With check in hand, I went to pick up the painting and was relieved to learn he had found the necklace. Even with the green background and the feeling that he had sent me to hell and back, I could not have been happier – until a friend surprised me with the gift of a second portrait.