By the time the 1980s had arrived, I was back at First Baptist, along with the three preachers from my days at Carroll Street. Two families, from my time at Southgate Baptist, had also joined the church of my youth. I attended a singles’ class on Sunday mornings and I sang in the choir. Often, I would join my parents for lunch after the morning service.

My mother was diagnosed with cancer in 1984. The love and support, from our church connections, was amazing in helping us to deal with such a painful experience. Our Minister of Music graciously allowed me to sing a solo during the last service my mother attended. On Mother’s Day weekend, in 1985, the Lord called her home.

After her death, I became more active in church, from teaching a Sunday School class, to playing the piano for Sunday morning assemblies. I even joined the bell choir. I agreed to chair the flower committee – which was responsible for the weekly worship service floral arrangements. I loved the chance to be creative and was known for a few over-the-top productions. 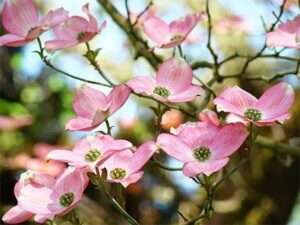 That spring, I cut down two slender dead trees from the woods behind our home. I loaded one in the back of my car and took it to the church. I ran back home and loaded up the second and left a trail of debris as I carried into the sanctuary. Using stands designed to hold flag poles, I placed the trees on each side of the pulpit, one behind the piano, and the other, behind the organ. For that Sunday, the trees stood bare for the service and the church was abuzz with curiosity.

Before the next week’s service, I used a hot glue gun to attach pink silk dogwood blossoms onto the bare branches, creating a light and airy look. Again, there was much discussion about the two 12-foot trees that now appeared to be in bloom.

It was the following week when it all came together. I taped trays filled with oasis and moss along the half wall that ran in front of the choir loft, and gathered dozens of assorted cut flowers for the oasis trays. It turned into a stunning spring garden, running the length of the stage area, still anchored by the two pink Dogwood trees. Oh, how I would have loved for my mother to have seen my creation.

The flower committee was a three-year commitment that left me a bit overwhelmed when added to my other church obligations. Never wanting to let anyone down, I just kept saying yes when asked to help. My breaking point, for no apparent reason, finally came when I was asked to host a Sunday School class party in my home. No one else had stepped up – why would they when they knew I would do it? Feeling pulled in every direction, I decided this would be my last commitment. I had to make it stop, and yet, I did not know how to say no. I could have, or should have handled it better, but the only thing I could think to do, was to walk away. And so, I did. 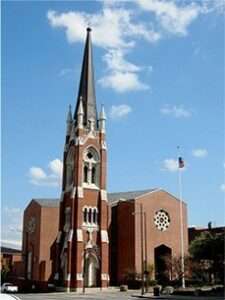 I would still occasionally join my dad, in the balcony, for a worship service – but more often than not, I’d simply meet him for lunch after he attended the church service. When he passed away in 2000, I held his funeral in the church that he loved. Although I do have wonderful memories from my years at First Baptist –  they are clouded by the fact that this is the place where my childhood innocence was stolen, by three different men, over and over again. As hard as I have tried, I find that I am unable to forgive, and therefore, unable to forget.

I have never given up on the Lord, and I know he has not given up on me – but in regards to the Southern Baptist church – I.  Am.  Done.