In the two years since my resignation from Carroll Street Chapel, the historic church building had been condemned and torn down. The dwindling congregation had moved across the interstate into a small rented building, which had originally been a residence. The one-story structure consisted of a central hall with two bedrooms on the left, used as classrooms. Drywall had been removed between the parlor and the dining room on the right, exposing the wiring and framework. This visually opened the combined rooms creating a makeshift meeting room with rows of folding chairs and a center aisle. A kitchen, in the back of the home, also served as a classroom. Each of the rooms had a fireplace with a gas heater, that became my responsibility to light on cold winter mornings. I would turn on the gas, strike a long kitchen match, and pray I did not blow up the place. 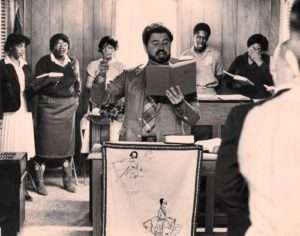 There were only about 40 members remaining, and the choir’s adult members were now gone. The remaining choir members consisted of eight African-American teenagers, some of which, had children of their own. We continued to sing traditional hymns during the service, but I let the teenagers teach me songs for their weekly anthems. It was definitely a challenge to learn those songs without the benefit of sheet music. Eventually, our pianist chose only to play the hymns for the service, leaving me to improvise as I tried to accompany the choir.

Having seen this in other churches, the choir wanted to sing and process down the center aisle at the beginning of the service. Although, it could often be a bit comical, we all stifled our laughter because it meant so much to them.

I had an immediate bond with the preacher as well as, felt it to be my most comfortable working relationship. We both adapted to the needs of the congregation, instead of trying to make them conform to our past experiences of how things had always been done. His sermons connected with the uneducated and the intellectual. His wife remained at First Baptist during his tenure, leaving me to think of the two of us as the odd couple in Christian ministry. 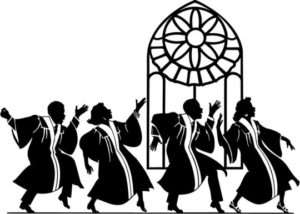 The only conflict I had upon returning involved a Belmont student, who was also a fellow First Baptist Church member. He volunteered his time at Carroll Street, and had filled in as music director before I had been rehired. Although I did not know at the time, he resented me and thought the job should have been his.

My former college roommate would often attend Carroll Street with me. We were the closest of friends but never romantically involved. I found myself in shock when the pastor pulled me aside to say there had been a complaint made by one of the members. He had been told that my college friend and I had been seen hugging and kissing in one of the classrooms. I demanded to know who had started the rumor, since I knew it to be false. I learned the accusation had come from the Belmont student and immediately confronted him. He confessed that he had lied hoping the scandal would have been enough for me to resign. He apologized and although I was furious, I forgave him.  However, I’m not sure he ever forgave himself.

Anyone that has been in the field of church work, has probably seen or heard experiences similar to what I had encountered. My expectations were high working with Christian people in a church environment. I had never imagined the drama that somehow always found me. Having been employed by one church, or another, for 10 years, I now found myself mentally, physically and spiritually exhausted. No longer did I think of this as my calling. I knew, in my heart, the Lord had something else in mind for me. Finally, I left the small mission and returned to First Baptist. Eventually, a new building was built for Carroll Street – the name changed – and they gained their independence.