I have a church bulletin from Miami’s Central Baptist Church, dated September 19, 1952, with my mother’s photo on the front. It announces her resignation, after 7 years, as the church’s Educational Secretary. The reason given for her departure – to assume the position of “full-time Christian mother.” I was born 3 months later. 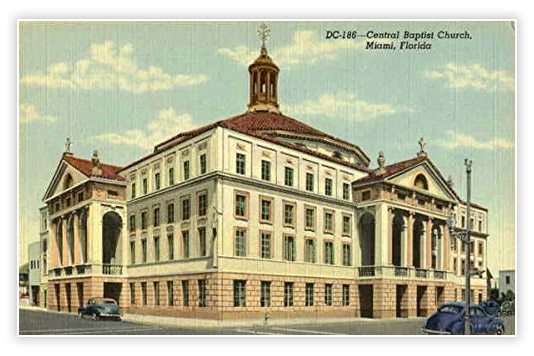 My father was the Scoutmaster of Boy Scout Troop 1, based out of Central Baptist Church. Two years later, he, and his assistant Scoutmaster, were arrested for sexually abusing boys within their Scout troop. During that difficult time, emotionally and financially, my mother took a part-time secretary job at a sister Baptist church in Miami.

I don’t think I realized until recently that the Educational Director my mother worked for, at Central Baptist Church, was Phillip Padgett. Phil and his family, like us, eventually moved to Nashville – although we came to Nashville to escape the drama that our life had become in Miami. A card of encouragement, sent to my mother from Lillian Padgett, was saved from that difficult time.

Our family became members of First Baptist Church, which is located downtown. The church was two blocks from the Christian Life Commission, where my mother worked, and the downtown shopping district, where I spent childhood summers, “killing time.” It had, and still does have, a large campus made up of several connected buildings. When we joined, it was anchored by the 1886 sanctuary building that was replaced by the time I graduated high school. They did save the Gothic steeple tower as a tie to the past. As a child, I roamed through those buildings, from basement to top floor, and can’t imagine there was much of anything I didn’t explore, alone, or with friends.

During my pre-teen and teenage years, the church would often have youth retreats at the Easter Seals facility, located in an adjoining county. One time, Phil Padgett was the guest speaker at one of those retreats and his youngest son came along. During that weekend, the son, who was three years older than me, led me to a private area where we experimented, as young boys do. I never shared with him that these acts had been performed on me, several years earlier, from men within my church.

The Padgett’s resurfaced again in my life during my college years. Their oldest son worked in the drama department at my school, the Southern Baptist affiliated, Belmont College, now University. Ten years after my graduation, and two months after my mother’s death, Padgett was murdered by a “trick” he picked up at an adult video store. This was the day before the General Jackson Showboat was scheduled to be launched from Opryland – where he had secured the job of the boat’s captain.

His mother, Lillian Padgett, had two sisters, each of which had two children – and out of three pairs of cousins, there was one gay and one straight child within each family. One cousin to the Padgett boys attended Belmont and later became my roommate and close friend for years to come.

First Baptist Church, in Nashville, holds many wonderful memories for me. It also is the place that as a seven-year-old, I found myself having my pants pulled down, in the empty Primary Children’s Department classroom, by a man that I’ve recently learned was known for these actions. I now know other children were warned to stay away from him, and I also now know, I was not the only one molested. Nor was he my only molester, as this happened numerous times over a period of several years. He was kind, as predators often are, and sometimes would give me a coin or two when he was done. I don’t remember ever feeling afraid and I never told my parents, or anyone, until this past year.

On the First Baptist Church website, I found this quote: “At First Kids, we believe children are one of God’s greatest blessings to all of us. We have awesome programs for kids of all ages that will teach them about Jesus in a fun and safe environment.”

I know many safeguards are in place now to prevent what happened to me, and others, from happening again. After all, that was more than 50 years ago. But it takes all of us, working together –  watching out for –  and educating children of possible dangers.