On a warm Sunday morning in December, I dressed appropriately and left the suburbs for downtown. I pulled into the crowded lot at First Baptist Church and was grateful to find a parking space. Arriving earlier than I intended, I sat in my car and said a prayer. As I waited, I reflected that the spot where I was parked had been the location of residential buildings when my family first joined First Baptist Church nearly 60 years ago. In fact, one building was always rumored to have been a brothel. I remember as a child thinking it seemed odd that it was next door to our church. 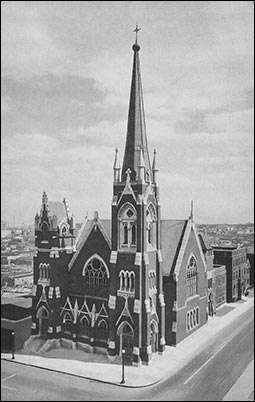 I had not been inside of the church building since my father’s funeral 17 years earlier and had not attended regularly for a few years before that. From childhood into my forties, I was expected to be in church every Sunday morning, evening and Wednesday night, whether I wanted to be or not. My parents were very active and insistent that their offspring be involved as well.

I made lifelong friends through our church and have many wonderful memories – but there were also things that I have tried to forget. By not focusing on the bad, I could enjoy the good.

Two years ago I learned a family secret that involved my father being accused of molesting a minor in his Boy Scout troop when we lived in Miami. My parents thought that by leaving Florida in 1955, we would escape the drama of the abuse scandal. However, a few years later, in the Nashville church that was our refuge, I was molested.

I was only seven years old when it started but it continued for several years with three male members of our church. I never told anyone, tried to bury it deep within me and never thought I’d share it with the world. But now, more than fifty years later, I chose to reveal something personal in the book I wrote that detailed my parents’ story.

I let the door crack open just a bit and a few secrets stumble out. I thought that would be enough but the response that I have received from others has changed my mind. By telling what had happened to me in my childhood, I found myself surrounded by those wanting to share with me their own stories. So after much reflection, I have decided to go ahead and let the door swing open wide. I have written a book, Songs from an Imperfect Life – which is my story. A chronological tale of what happened to me as a child, followed by my actions and the risky behavior patterns I exhibited as a teenager and beyond.

To tell my story, I needed to start at the beginning – First Baptist Church, downtown Nashville, Primary Children’s Department. Because that church building had held so many of my secrets, I wanted and felt that I needed to walk those church halls one more time. The old sanctuary building and men’s restroom outside of the choir room was torn down when I was in high school. And the Primary children’s department had been remodeled long before I had left the church. But there were other areas, such as the Intermediate department on the third floor of the Educational building, that also held memories that I had tried to forget.

A couple of my friends had offered to go with me that morning, but I chose to go alone. I walked across the parking lot and entered the lower-level back entrance. My vivid memory of something that had happened there was quickly diminished as I found a totally new entrance. I climbed the stairs, expecting to find a linoleum tile hallway on the third floor, but everything had been carpeted. I glanced into the open doors of what had been the Intermediate department only to find it had been remodeled and combined with the adjoining space. It did not look anything like I remembered from my teenage years when my father served as the department superintendent. I even checked the men’s room on that floor, but found it too had undergone total renovation.

Choosing a different route out of the building, I tried to blend in with the unfamiliar faces flooding the hallways as Sunday School ended and parishioners rushed toward the sanctuary for the morning service. Once I was back in my car, I took a deep breath and felt relieved. Those childhood memories no longer existed in that structure for me. Though I fear some memories will forever haunt my dreams.