My parents had two puppies, when we lived in Miami, with the unoriginal names of Li’l Girl and Li’l Boy. Li’l Girl made the move with us to Tennessee and was the dog that jumped out of the car when my mother, Joyce, was pulled over for speeding, as she crossed the Florida line, causing me, at the age of three, to cry until the policeman rescued her. I remember she later had a litter of puppies, which after seeing a Children’s Theatre production, I named each after one of the play’s characters. Ivy, is the only name that I now recall.

For most of my childhood, I had a black and white Toy Fox Terrier, that my dad named Paladin, after his favorite TV show, Have Gun – Will Travel. Paladin’s claim to fame would be singing while I practiced the piano. If inside, he would stand by the piano and howl. Or, if let out the back door, he would run around to the front of the house and stand under the window, to continue his serenade.

There were several years, after Paladin passed away, that I did not have a pet. And then one Christmas morning, I opened a small box with a note inside saying “Good for one Yorkie.” At that time, I was living above our Christmas store, and the adorable Yorkie-mix puppy, that I named Puddin’, would play in the shop. A freak accident occurred, while I was upstairs, that had my employee running to find me. It seems Puddin’, while playing, had jumped and hit her head on a metal shelf. I held her lifeless body in my lap as we rushed her to our vet, but it was too late. I was devastated.

My parents chose to immediately find another Yorkshire Terrier for me. This one was pure-bred, and received the moniker of Lady Puddington of York, aka, Puddin’ Two. This adorable little heartbreaker would sleep on the shop’s counter and often startle a customer, thinking she was a stuffed animal. Puddin’ began going home with my parents, over the weekends, where she could run free in their backyard. However, when my mother became ill, Puddin’ stayed with them full-time – and would ride, each day, into work with my dad. She would stay in his office, one block down from our Mistletoe Shop.

Often, when going to work at the same time daily, you’d find yourself in rush hour traffic next to the same people. So much so, that one day, when my dad stopped at a traffic light, the gentleman in the car next to him mouthed, “Where’s the dog?” My dad laughed and pointed to the back window, where Puddin’ had perched herself, out of site to the fellow rush hour driver. 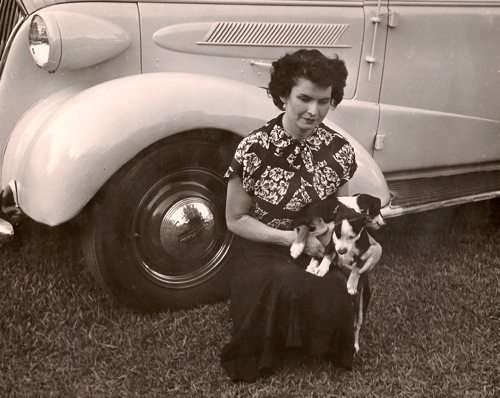 Being a firm believer in Certs breath mints, my dad gave one to Puddin’. She fell in love with the mints and knowing that he always kept a package in the car’s ashtray, would point her nose and begin to whine, each time they got into the car. At home, the extra mints were kept in a drawer in the family room. One night, Puddin’ stood in front of the chest and began to beg. My dad, simply said “No” and did not move from his chair. A few minutes later, she tried again, and was met with the same response. After three unsuccessful attempts, it looked as if she was resigned to the fact, he was not getting up to give her a mint. However, she was not done. Puddin’ then went to the back door and cried to be let out. With that, my dad got up and headed toward the door – but this clever little dog had something else in mind. She immediately ran toward the drawer with the mints and started to beg. Her plan worked! She had succeeded in getting him out of the chair! Hardly able to contain his laughter, he crossed the room, opened the drawer, and gave her the much-deserved mint.

Puddin’ lived a long life before reaching the point of rarely eating and loss of bladder control. Our vet said it was time to let her go, but it took us a couple of days to come to terms with that decision – and then one morning, my dad called. I rushed home and carried her in my arms, as he drove us to the veterinarian. I held my sweet baby as the vet gave her the shot that would end her pain. My dad tried his best to comfort me as I began crying but he was unable to hold back his own tears. Puddin’ had brought so much joy to our family as well as, been such a comfort during my mother’s final days. It felt like we lost our best friend – and one more connection to our beloved Joyce.