My grandmother’s home had a black rotary dial telephone, sitting on a small table, beside a straight-back chair, in a dark corner under the stairs. As a child, I can remember my mother talking on that phone, for what seemed like an eternity, when we would visit my grandmother in Miami. From that phone, she would make plans to catch up with her friends – but there would also be frustration, because the phone was a party-line, shared by several other homes. Of course, if you were quiet, you could eavesdrop on their conversations – but mainly it was an aggravation, because you were unable to call out until they were done.

My sweet mother spent untold hours tethered to a phone and passed away before cordless phones, call-waiting and the ability to have a conference call became the norm. In her wildest dreams, I’m sure she never imagined the existence of cellular phones, texting or taking photos or videos with a “portable” phone. These modern-day miracles would have been overwhelming to what her past experiences with phones had been.

In one of my mother’s letters, from 1955, written to my father, during the time he was being held awaiting trial, she wrote: “Darling, we had a letter from the telephone company with a little thing to put on our phone. The new number will be Newton 4-1639 as of December 3rd. I know it will take me a while to learn it.” Imagine what she would think now with phone numbers, not only having 7 digits but also, the addition of a 3-digit area code. 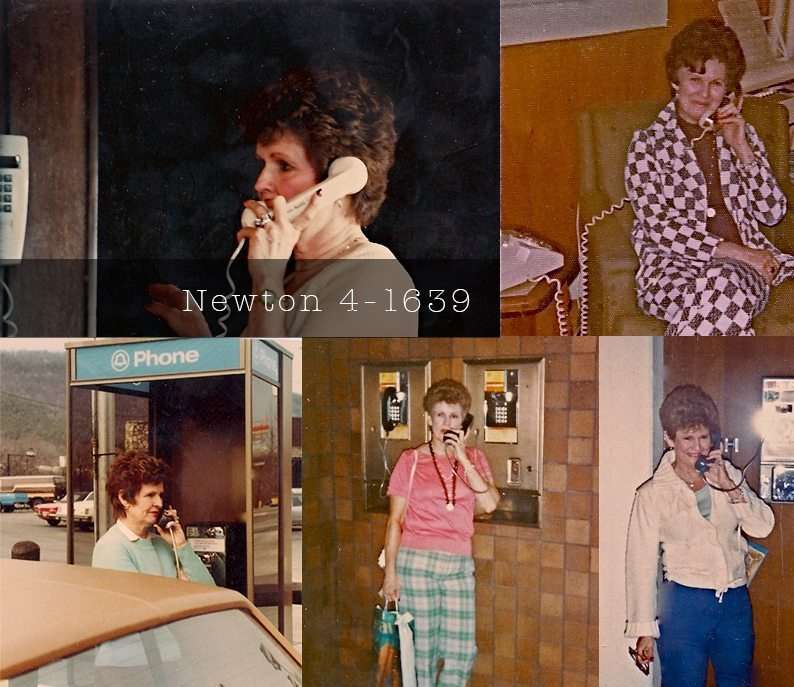 I have many photos that my dad took of my mother talking on the phone. Most of which were taken during their travels, when she would call home to check on me, her precious baby boy! But my favorite phone story, involves something that caused so much frustration on my dad’s part, but turned into outright laughter.

My mother was active with the Christian Women’s Club and eventually became their president. This involved many hours on the phone, so much so, that my father installed a second residential line, and only the two of us knew that number. This was our emergency line to get through to my mother. However, late one afternoon, my dad called to see if he needed to pick up dinner on his way home. As usual, the line was busy. So, he called the second line, but it was also busy. He could not understand, even if she had been talking to me, why both lines would be in use. It made no sense. So, without stopping to pick up dinner, he drove straight home and found my mother, who was deaf in one ear, sitting in the middle of the den sofa with both phone receivers against her good ear. She had mastered the art of conference calling by using both phones located at each end of the sofa. As for my dad and me, we realized having a dedicated hotline to reach her, was only a dream.