Home for the Holidays Part 4

My family opened the Mistletoe Shop, a year-round Christmas store, in 1979. My mother and I operated the store together until she passed away in 1985. It was an amazing experience leaving me with so many stories to share and a few that I better keep to myself! 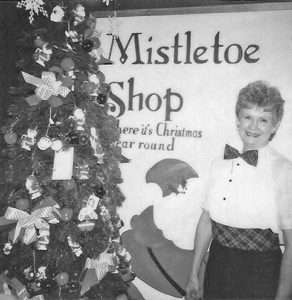 Having a Christmas store definitely added pressure when decorating our own homes. My parents still hosted their annual Christmas Open House but now, their decorations had to represent the wonderful things that we offered at the store. The traditional cut Balsam tree was replaced with a top-of-the-line artificial tree that would continue to go in the usual spot next to the fireplace in our den. It would be decorated with the treasured family decorations, complete with tinsel and icicles. However, an artificial flocked tree was added in the more formal living room and then decorated with ribbons and exquisite ornaments from the store.

My mother had always loved unusual Nativity sets and continued to add to her collection from our trips to market. Plus, she developed a passion for vintage Santa figurines and began checking out estate sales to find these treasures. When the number of collectables outgrew their current display space on the top of the dining room buffet, a curio cabinet was purchased and the Christmas decorations were left out year round.

Holiday traditions were altered in the third year of owning the shop when we began having what would become an annual day after Christmas sale. We were blown away to find a line of customers snaking down the block an hour before opening. Everyone wanted to take advantage of the sale prices which resulted in a mad rush once the door was unlocked. 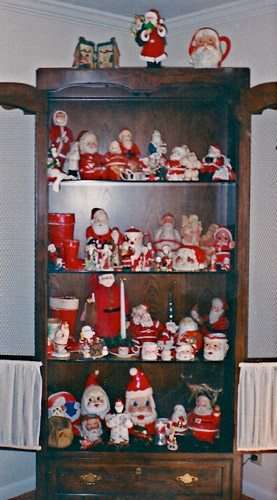 Over the years, as the annual sale continued, we began to notice flaws in our plan. Instead of the sale rewarding the customers that shopped with us throughout the year, it began to attract people that would shop with us only that one day. Some of those people would even come in a day early to scout out what they wanted so that when the door opened, they could run directly to those items. We also began to notice merchandise moved from their displays and hidden behind a tree or cabinet. Because of this behavior, a new family tradition was started.

After we opened our Christmas presents on Christmas morning, enjoyed breakfast and called the relatives, we would come to the store to prepare for the day after sale. It was like a treasure hunt searching for items that customers had hidden – but once found, we’d put them back in their original spot. Often the attitude of many of the once-a-year sale customers would dampen my holiday spirit. Although so many wonderful people shopped with us and still to this day share their fond memories of the store with me, we also had our share of “Bah, Humbugs” that complained if they missed getting a sale item and thought we should special order sold out items for them at cost. Of course, there was also the puzzlement of Baby Jesus often being stolen from our Nativity sets. Seriously, I can’t even imagine the bad juju that would be associated with stealing Baby Jesus.

Eventually, I would spend my Christmas day afternoons moving most of the store’s merchandise before we opened the next morning for the sale. If Christmas china was in the front room, it would be moved to the back room. Nutcrackers would find their display in another part of the store. And so on and so on. That way, when the door was unlocked and the stampede began, the “professional sale shoppers” that had scouted out and hid items in advance, would rush to those spots only to find the items moved. I felt this gave the other customers a more level playing field. Ho, ho, ho!