Home for the Holidays Part 3

I can remember three rules in the York home pertaining to Christmas.

1) Christmas lights had to be multi-colored.

I’m not sure there were many options of light colors in the 1950s and early 1960s other than multi-colored. However, I do remember neighbors that used only the blue lightbulbs on the outside of their home. It was sacrilege to my father but I thought it was stunning. It would be nearly thirty years later before my father would finally succumb to the trend of white lights.

2) Icicles were mandatory on the Christmas tree and applied one at a time.

Our Christmas tree was not fully decorated until the icicles were in place. My mother and I would offer to help hang them on the tree but grow impatient with my father’s methodical one by one placement and often be excused from the chore due to our sloppiness. 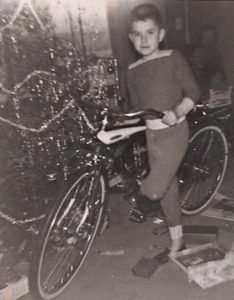 While others may travel at Christmas to be with family, our Christmas mornings were always spent in our home. Occasionally a relative or two might join us, but we never traveled anywhere at Christmas. Now that I know my father was in jail awaiting trial Christmas of 1955, I wonder if that had anything to do with his obsession of having our family together in our own home on Christmas morning.

A family tradition of ours that took place on Christmas eve was to read about the Birth of Jesus from the oversized family King James Bible that sat on our coffee table. I still have this Bible which holds, tucked between it’s pages, a single dried yellow rose from my mother’s funeral arrangement.

Christmas in our home was always an embarrassment of riches. The sheer explosion of wrapping papers, ribbons and bows after gifts were opened filled our living room. Children in the neighborhood were jealous of the assortment of gifts that Santa would bring me clearly realizing that I was never that good to be blessed with the over-indulgence. 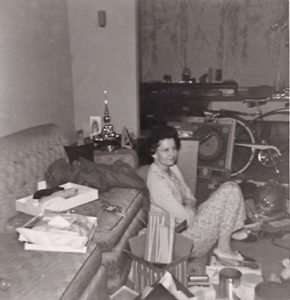 Surprises were also a big part of our Christmas. Gifts would often be disguised in a larger box with a rock, book or brick inside to add weight. Sometimes they would be hidden elsewhere in the house with a note that offered a clue where to look – and few Christmases would pass without my mother remembering later in the day of something she had hidden but forgotten to place under the tree. As I got older and able to buy gifts with my allowance or grass-cutting money, I would also work hard at surprising my parents with unusual gifts and deceptive packaging.

One year, when I was probably eleven or twelve, a pool table appeared in our garage. My father told me that it was a Christmas present for the boy that lived next door and that his father had asked that it be kept in our garage so that his son could be surprised. Although I was somewhat disappointed, I played along and made sure the garage door was closed at all times so as not to ruin the neighbor’s surprise. 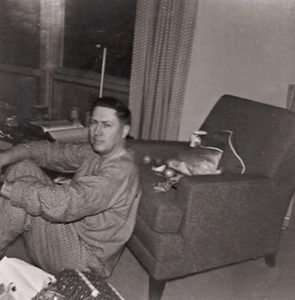 When Christmas morning came and the gifts had all been opened, my dad suggested that I go downstairs and see if I noticed anything different. As I descended the stairs into our playroom, I saw the pool table had been moved from the garage and occupied the center of the room. It took me a moment to realize it had always been intended for me and that I had fallen hook, line and sinker for the story of it being a surprise for the neighbor’s son.