Home for the Holidays Part 2 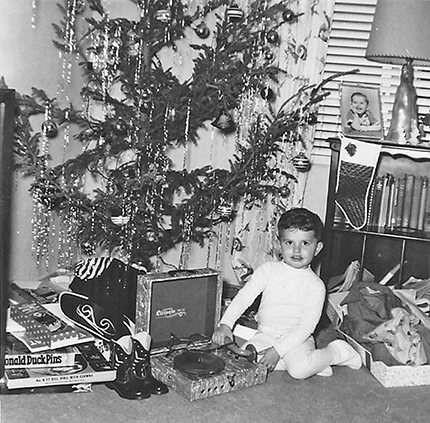 I have always loved the iconic Christmas photo of me sitting in front of a sad looking Christmas tree with a record player along with a pair cowboy boots, (that I learned were a gift from family friends) at my side. The date on the black & white photo is 1955 and I would have been three years old at the time. In fact, I would have been just two weeks into my third year. I was born on December 11, 1952 and not knowing my gender, my parents sent out Christmas cards that year signed Bob & Joyce and the little “New” York.

My father was an amateur photographer and I had always assumed he took that photo. However, two years ago, through a box of letters my parents left for me, I learned that my father was in jail awaiting trial that Christmas. I have no memory of that time but through my mother’s handwritten words, I now know so much more about that photo and it has become my most precious Christmas memory.

My mother wrote on December 1: Ron really put on a show. He was busy talking about Santa Claus. He kept trying to tell us something he was going to get and was very disgusted when we couldn’t understand. Finally, Brownie guessed records and sure enough he was talking about a record player ‘cuz he went on to explain about putting a record on and pushing a button.

Then on December 8 she wrote: Baby, I’m going to try to get Ron’s record player this week because I’m afraid they will all be gone. I want to get something that he can play himself because that is half the fun. I don’t even like to think of Christmas but I just feel that the good Lord is going to see that we are together.

She continued on December 14 with: I went to Jefferson’s today to look at record players. They had a plastic one for $8.88 and then the next one was $18.00. I think I can do better than that. Ron has learned that you are supposed to ask Santa Claus for things so everything he sees he says he wants Santa Claus to buy that for him.

Then on December 21 she wrote saying a friend found a record player: I got Ron’s record player from Barbara today. It is very nice. It is in a little grey case that looks like a suitcase. Eight records came with it. They are mostly nursery rhymes – a toy march, etc. I know he will be tickled.

With having to take a job to support us while my dad was in jail, my mother had little free time to shop for a Christmas tree. But on December 23 she wrote my dad saying: Well, darling, we finally got our tree up. You would probably be ashamed of it, but Ron and I aren’t professional like you are. Honey, they had a tree at Church that they used for a play and weren’t going to use it anymore, so I brought it home. It is about six feet tall – sorta flat on one side and not nearly as pretty as the ones you have always gotten, but it was free and something that I could handle myself. It looks alright with the decorations on it. When I picked up Ron from nursery school, I had it in the trunk of the car and he was so excited that he could hardly wait to get home.

On Christmas Day 1955, my mother wrote: …darling, we went by Mother’s. She was feeling better and we stayed for a little while. Ron was wound up and really showing off. I wish you could hear Ron sing: “You better watch out – you better don’t cry – I’m telling you why – Santa Claus is coming to town.” He sang it once and the folks clapped for him so he sang it several more times.

My mother, relatives and family friends made that Christmas special for me. I can only imagine the pain my mother felt and my dad’s heartbreak at not being able to see his three-year-old son’s excitement Christmas morning. Although I no longer have that record player, I do still have those cowboy boots, that precious photograph and now, a cherished memory.