Merriam-Webster defines guilty pleasure as: something pleasurable that induces a usually minor feeling of guilt.

With too many guilty pleasures for one blog article, I’m going to choose one that unfortunately is no longer an option for me – Howard Johnson’s. Yes, the orange roof restaurant with the turquoise logo!

In the 1920s Howard Johnson purchased a pharmacy and soon realized that the soda fountain was a goldmine. His ice cream recipe, with an increased content of butterfat, eventually led him to trademark his 28 flavors. From there he opened his first restaurant in 1929 and featured fried clams – my guilty pleasure.

Howard Johnson’s restaurant was a popular spot for the “after church” crowd when we lived in Miami. In fact my mother wrote to my father on December 18, 1955 saying: “When we left church, Ron said he wanted to eat dinner, so we went to Howard Johnson’s in the Springs and I got an order of fried clams and Ron ate practically all of them.” I had just turned three years old but clearly had already developed my love affair with the delicacy.

My parents would speak in code as we traveled the interstate to and from Miami after moving to Tennessee. At first they would whisper “Ho-Jo” as we passed a billboard advertising a location at the next exit. However that was easy for me to figure out. I also remember a time they used initials in hopes of throwing me off but from my place in the backseat of the car, I knew a restaurant was coming up and begged them to stop.

In the 1960s there was a Howard Johnson’s restaurant on Murfreesboro Pike that I remember going to with my parents – eventually a motel was added. The next to come on the scene was a restaurant with motel built on a bluff overlooking I-40 near our home. I thought about that the other day as I stopped at the new Starbucks now built on that site. Another Howard Johnson’s restaurant and hotel opened at the Trinity Lane exit of the interstate and I would often drive over and place a take out order when I lived above our Mistletoe Shop. There was also one at the Shelbyville exit in Murfreesboro that I had been known to frequent when in the area. Eventually, one by one, they each closed and two of the buildings have now been torn down. 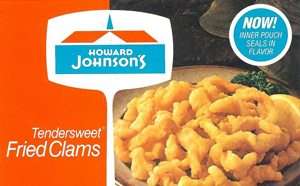 For a period of time Howard Johnson’s offered their fried clams in the frozen food section of our grocery store and although it was a valiant effort, it still wasn’t as mouth-watering good as what was found in the restaurants.

The last time I had fried clams at a Howard Johnson’s was in New York shortly after my father passed away in 2000. For many years there were two locations in Times Square across the street and a block down from each other. And while I am aware that there are fabulous places to dine in New York, at least once each trip I had a pre-theatre meal at Howard Johnson’s. I preferred the one on the westside with the Gaiety (male burlesque) Theatre on the second floor – across the street from the Marriott Marquis Hotel.

Yes, other restaurants offer fried clam strips – often overcooked tasting like fried rubber bands, but none matched Ho-Jos perfect batter. I still hold fond memories of all of the guilty pleasure fried clam meals that I had compliments of the late, great Howard Johnson’s.

According to Wikipedia, one lone restaurant remains located in Lake George, New York. If I learn that they still offer the original clam dinner, I might just have to make a trip up north.