Merriam-Webster defines selective memory as: “the tendency to remember only what one wants to remember.”

Through the decades of my life, I have seen hundreds of films. There are only a handful of movies that standout. If I stop and think about it, or have my memory jogged, then other films come into my thoughts. But if you asked me to quickly list 10 films that I remember seeing in a theatre, I might struggle. Of course, now that I’ve been writing a series on cinema, names of films are bouncing off my brain. I’m old enough to have seen classics (before they were classics), in the theatre like The Sound of Music, Mary Poppins, Funny Girl , Cabaret and more when they were first released. But with movies popping up on every TV channel, it’s difficult to separate first experience with familiarity.

In last week’s blog, I shared that I spent childhood summers in the downtown movie houses and yet, I don’t remember what movies played. In college, I would often slip out of the dorm and disappear into whatever movie was playing in the neighborhood theater. After college, living above my year ‘round Christmas shop across from Vanderbilt University’s campus, I would walk over to their student center 3 or 4 times a week and take in a film. They changed titles nightly and I was often intrigued with their selection of foreign films. 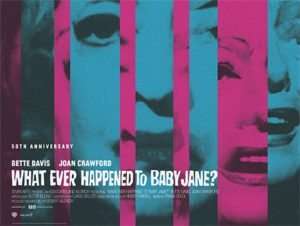 I shared with you that the first film that I remember seeing was Hippodrome. It was in 1962, I was ten and it was a foreign film. My grandmother took me when I visited her in Miami. What I find interesting is I have clear memories of 5 movies, each for a different reason, over the years, while I was in Miami. The second movie that has stayed with me, was also in 1962 and I went with my grandmother. I’m sure she saw the names of the screen legends in the billing and didn’t think much about the actual story. The movie was, Whatever Happened to Baby Jane? Even at age 10, I think I recognized it for the gem that it was. High drama – high camp. No Disney princesses for me – my childhood memories involve aging, bickering screen goddesses. 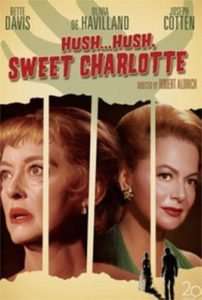 Two years later, Hush, Hush Sweet Charlotte was released. This was to also be a Davis – Crawford vehicle but Joan Crawford found herself being replaced by Olivia de Havilland. With my parents out of town, I stayed the weekend with a young couple – the husband worked for my dad. We ended up downtown at the Paramount Theatre, yes, the same theatre where I had been molested previous summers. However, eight minutes into the story, they had no choice but to leave after the image of a hand was shown being chopped off – I was terrified. To this day, I have yet to watch the entire film.

We walked out of the Paramount and down one block to the Lowe’s Vendome and watched Jack Lemmon and Virni Lisi in How to Murder Your Wife. In spite of the title, it was actually more lighthearted. Later that night, I woke screaming from nightmares and ended up sleeping on the floor in their room. I don’t remember ever staying with them again.