Walt Disney said: “Movies can and do have tremendous influence in shaping young lives in the realm of entertainment towards the ideals and objectives of normal adulthood.” 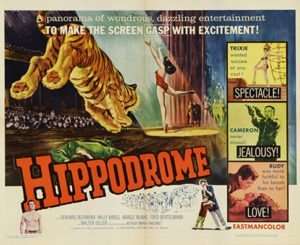 My mother wrote to my father, on November 30, 1955, telling him that she took me to a movie. She shared that after the newsreel, cartoon and short, my eyes were starting to close, so we left. The movie was Walt Disney’s, The African Lion. I was two years old and have no memory of that day but I imagine I am one of many whose first movie experience was something from Disney studios.

The first movie that I actually do remember seeing has stayed with me for more than 50 years. I was 10 years old at the time and visiting my grandmother in Miami. I remember the title of the movie being Hippodrome and the story revolved around circus performers. I also remember the leading actor and that his character’s name was Rudy. And, although puberty doesn’t usually begin until around the age of 11, I felt an unexplained attraction and convinced my grandmother to sit through the movie for a second time. Hippodrome had an impact on me that I still feel today. I have tried, without luck, to find a copy of the movie. I’ll admit that there is a part of me that fears the illusion that I have held on to, for all of these years, will be lost by seeing the movie now as an adult.

In searching for the film, I did find movie stills and posters. Finding these helped make sense of the emotion I felt. I’ve also found reviews such as this one from the New York Times in 1962: “The movie’s real asset is its picturesque coziness in trailing a small troupe of specialty performers around various arenas, supper clubs and hippodromes. Three of them—a handsome tiger trainer, a beautiful dancer and a sharp-shooter with a Svengalian air—tangle romantically and professionally.” 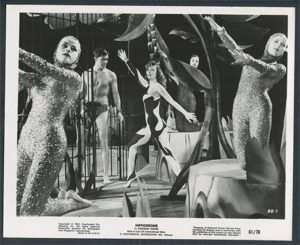 I realize now, after recently seeing a movie still, that what I was feeling had much to do with the “handsome tiger trainer” and his wardrobe that consisted of not much more than a leopard skin Speedo. What really struck me as funny and once again, one of those strange connections I keep finding on this journey, was the character’s name for his leading lady – Trixie. As many of you have come to know, I named my adorable Calico rescue, Miss Trixie Delight – a name borrowed from another movie –  Madelyn Kahn’s character in Paper Moon. Now I wonder if the name “Trixie” has been in my subconscious all along?

Hippodrome is an “Austrian-made backstage drama” released in 1959. An English-dubbed version made it’s way to the states in 1962. The movie poster boasts “Trixie wanted success at any cost!” and “Rudy was more faithful to his beasts than to her!”

Grand movie houses lined the main street of our downtown shopping district – just two blocks from our church where I was first molested. During my childhood summers, my parents felt I was not old enough to stay home alone while they worked. Both parents jobs were downtown so I would often go to work with them. When the stores and theaters came to life around 10 in the morning, I would be given money and head out alone to explore. Often I would escape, with popcorn in hand, into those dark and cavernous theaters and settle in for a double-feature. I was never by myself for long.

Walt Disney may have said movies help influence young lives towards the ideals of “normal adulthood,” but inside of those theaters, as the movies played, my childhood became far from normal.