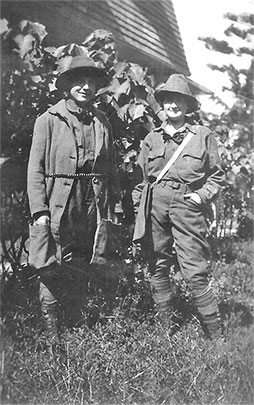 In 1920, my maternal grandmother was arrested in Chattanooga, Tennessee, because of her choice of apparel. She, and a friend, had decided to hitchhike from Nashville, Michigan, to Miami, Florida. For practicality they wore men’s clothing. That was enough to have them arrested in Chattanooga. The charges were dropped and the matron had them put on skirts over their army pants so they could be admitted to the Y.W.C.A.

They had been stopped earlier in Cowan, Tennessee, by a group of railroad men, because two girls had escaped from the Tennessee Girls’ Industrial School. When the men realized they were not the escapees, they took up a collection to put them on a train saying it was too dangerous for them to walk through the mountains. So they arrived safely in Chattanooga only to be arrested.

Once they reached Ringgold, Georgia, they met a federal prohibition officer. He was kind enough to give them a letter addressed to the fine Georgia folk in hopes that it would help ease their travel through the state. Unfortunately, they were arrested again in Atlanta. The charges were also dropped and they continued their journey on to Miami.

Our family learned of this from a front page story my grandmother had saved from a 1920 Atlanta paper. As far as I know, this was our family’s first connection to Chattanooga.

I was born in Miami, raised in Nashville, but Chattanooga is a piece in the puzzle I call my life. In 1956, after a scandalous trial, my dad left Miami for Charleston, South Carolina. He had a job with Independent Life and Accident Insurance Company and planned for my mother and I to join him once we sold our home. It was late spring before the house sold and by then, Independent Life was expanding into Tennessee. Their first office would be in Chattanooga. They already had a district office manager chosen but told my dad if he would help open that office, then they would move him to Nashville to open the office there.

We rented a home in Chattanooga for 9 months. A recent photo showed the house had barely changed since we were there 60 years ago. I was three years old and turned four a couple of weeks before we celebrated our first Christmas in Tennessee. I only remember a couple of things from that time. It seems there was construction across the street from our home and I managed to get cement in my eye as I played there. The other memory stands out because it was often told in my family. My mother witnessed her first snowfall in Chattanooga and not knowing to be fearful of driving in it, and much to my father’s disbelief, she gathered me up and drove up Lookout Mountain to witness the beauty.

Once we moved to Nashville, Chattanooga became more of a pass through on our way back and forth visiting family in Miami. One of those trips left us stranded in Ringgold, Georgia, with car trouble. Ringgold is now home to my cousin and her family. She is the daughter of my mother’s baby sister and the granddaughter of our hitchhiking grandmother. 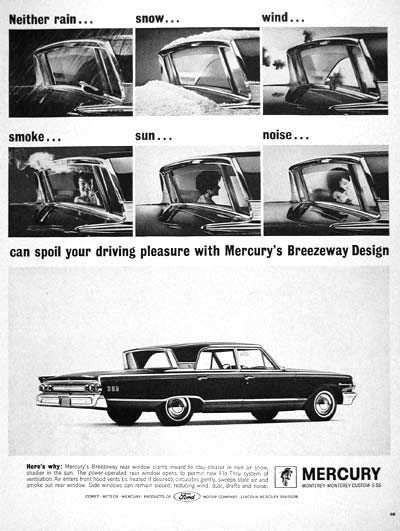 I do remember another visit to Chattanooga in the mid 1960s where we stopped at the home of the district office manager. His house was perched on the side of a hill with a wall of glass across the back overlooking the city lights. I especially remember his brand new Mercury “Breezeway.” This unique car was made between 1963 and 1968 and named because the back window of the sedan was power operated and could be lowered to let a breeze flow through. It definitely felt like a car from the future to this young boy.

I will have more Chattanooga connections and stories to share in next week’s blog.