And Then There Were None Part 5

Alice, the baby of the York family, was 17 years younger than my dad. He called her Poochie and she called him, Bubba. She loved to tell the story of when I was 7 years old, and was the ring bearer in their wedding, in Richmond, Virginia. All dressed up with freshly polished shoes, piled into the car on the way to the church, I managed to get shoe polish on her sister’s dress, my aunt Peggy, the maid of honor. 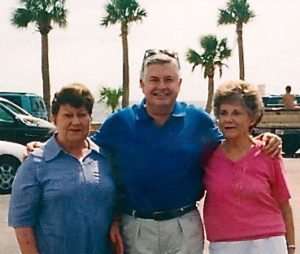 My aunt and uncle were married for 58 years and lived in California, followed by Ohio, and because of that, I rarely got to see them. After my uncle retired, they moved to Ridge Manor, Florida, north of Tampa. However, when I would visit, I would stay with her sister, Peggy, who told me Alice was not comfortable having me stay at her home. However, after Peggy passed away, I learned that she had told Alice, that it was me that was not comfortable staying with her. As I shared last week, the way to tell if Peggy was lying, was to see her lips moving. I regret not having the chance to spend more time with Alice, or getting to know her better until the last few years.

When I discovered the box of letters, I called Alice and asked her what she might know. Her first words were: “What do you mean you’re just now finding out?” She had always assumed that I knew about my father’s crime. In 1955, when the events took place, my grandfather had transferred to Richmond, so they were not in Miami. Also, she was just a child herself, only 14 years older than me. Her mother, my dad’s stepmother, had told her it was all a mistake and that the boy kept changing his story. A couple of other things, that she had remembered, gave me a new, and very helpful, direction to follow in piecing the story together.

Last fall, I called Alice, as I would do every few weeks. She had struggled with health issues for many years – Asthma and Rheumatoid Arthritis. Recently, the Arthritis had begun to attack all parts of her body. She told me that she realized that she did not have much longer on this earth. I told her that couldn’t be true but then she said: “Remember, your dad passed away at 78, and your granddad.” She went on to say her sister, my aunt Peggy, also had died at 78 and that with her recent birthday, she was now 78. When I hung up the phone, I immediately looked at my impossibly full calendar and found a Sunday/Monday free and booked a flight. I knew I had to go, even if it was just for 24 hours.

My book launch was not until the end of January and the hardback version was not yet available. However, I did have a copy of the softcover version that had been printed for the press – I took that with me. My uncle picked me up at the airport and tried his best to prepare me for what I was about to see. Alice had lost a great deal of weight, and had begun to sleep on the living room sofa for comfort. She had trouble getting up and was unable to raise her arms. But she still had that sweet, loving smile and I did my best to be strong for her. She had not been out of the house in months, with the exception of doctor’s appointments, yet she was determined we were going to a restaurant for dinner. Somehow, she gathered all of her strength and off we went. We told stories, laughed and had a wonderful time. That night, she began reading my book.

I hated to leave her, but also knew, my visit had to have been a strain. The next morning, my uncle drove me to the airport and told me how much my trip had meant. He said that Alice had rallied for me and it had done her good. He confided in me that after 58 years together, he was not sure how he would be able to go on.

Alice called me, once she had finished the book, giving praise for my skill but more importantly, she complimented me by saying, the book was written with love. That meant so much to me, since it is the story of her big brother, my dad. She said: “You didn’t try to place blame, you simply told a difficult story and let the reader decide how they wanted to react.” I sent her the hardback version, as soon as it was available, and she read it again. This time she told me how brave she thought I was and how proud she was of me. Three months later, this past May, at the age of 78, Alice, no longer in crippling pain, met her Lord with open arms.