And Then There Were None Part 4 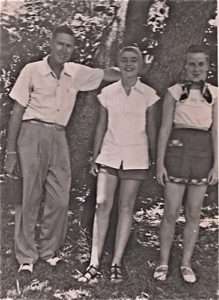 My father lost his mother when he was 11 years old. His father remarried and they had two daughters, my aunts, Peggy and Alice. Through the years, I always felt closer to Peggy. She was feisty, opinionated, and as I found out in later years, a habitual liar. She just could not help herself. Even when the truth would be easier, she would lie.

Peggy married Earl, a military man, and they were stationed in Germany for several years. She returned to the states with the requisite Hummel figurines, cuckoo clocks and such. She had a pair of etchings titled, Vegetable Man and Vegetable Woman, that I always admired.

Peggy moved to Florida, when she and Earl divorced, and eventually married a man she had known when they lived briefly in Atlanta. Leonard was several years older than Peggy and a contractor by trade. He joined her in Florida and began building homes north of Tampa, in Zephyrhills and Ridge Manor. He built their home and a home for her sister, Alice and husband, Fred, with their backyards connecting. Alice and Fred rented out their house until Fred retired and they were able to move to Florida.

Peggy, never had children, and would always send me a generous check for Christmas. She and Leonard would visit us on their way to their second home in Gatlinburg. They loved each other but were unable to communicate civilly. Argumentative and with raised voices was their preferred way of dealing with each other. 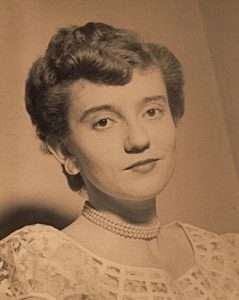 Peggy was employed by the President of Lykes Brothers in Tampa but once Leonard retired, he expected Peggy to do the same. He had put together a nice nest egg and they should have lived comfortably for the rest of their lives. However, he turned the finances over to Peggy and in time, they were in financial straits. Leonard had invested his money with my father but when Peggy took over, she would often cash out an investment and drain the accounts, one by one. My father was concerned that Leonard was unaware and also felt that Peggy was forging Leonard’s signature. But Peggy always had a story, an excuse, a tall tale to weave.

She told me that when she and Earl lived in Germany, that he drove drunk and had an accident. She said he made her tell the authorities that she was driving so he wouldn’t be in trouble. True? No one was ever sure. She told me my grandfather was racist, but justified because an African-American man had killed his brother. Again, who knows? And she said my grandfather had an affair with a woman named, Flossie, and that she had a half-brother. My dad was never aware of that. One thing that turned out to be true, her ex-husband married her current husband’s ex-wife. Basically, they just exchanged spouses.

After my dad died, Peggy would occasionally call crying and give me a sad story about Leonard and how she couldn’t pay the bills because of something he had done. One time it was a secret Post Office box that she discovered. Then there was an American Express account, she did not know about, that was overdue. Each story became more dramatic and always, she would make me swear that I would not tell her sister, Alice. I would send $1,000 here and a $1,000 there and finally, at $9,000, I told her I could not do that anymore. She never spoke to me again.

At that point, I did tell my Aunt Alice and she felt badly that she had not known because all of those stories were lies. Peggy threw money away. She had dozens of dresses with tags still on them, and she spent money as if it would never end. But it did, and once my uncle Leonard died, she was destitute and selling off the Hummel collectibles, furniture, and antiques. She had pawned her jewelry. When she totaled her car, Alice and Fred gave her one of theirs. Alice no longer would give her money but offered to buy her groceries, pick up her prescriptions and pay her electric and water bills. Peggy resented her, talked awful about her, as she had through the years, but Alice continued to help.

Peggy finally lost the house and moved into an efficiency apartment, with only a few pieces of remaining furniture. All of the paintings, that I had given her through the years, were gone, and her estate was penniless, when she died. However, the German etchings of the Vegetable Man and Woman had been saved, with a note to give to me. My aunt Alice had hoped they were valuable and insisted I have them appraised. I did and found that they are worth less than what I spent to have them framed. But to me, they are invaluable.