And Then There Were None Part 2

Betty was the first born, followed by my mother, Joyce, three years later. June, the third of the four Broadway girls, came into this world after another two years. But, Bobbye did not arrive until seven years later, when my grandmother was 42 years old. My mother had told me that there had been a baby stillborn after June, which explains the expanse of time between June and Bobbye. 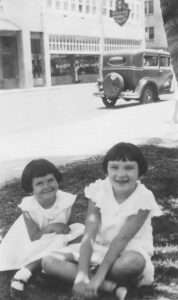 I have an adorable photo of sisters, Betty and Joyce, when they were children. However, the only adult photo I have of Betty, is in my parents’ wedding party photographs, where she served as Matron of Honor. Her son, my cousin, Robert, also in the photo, served as page in their wedding. He would have been seven years old at the time.

Five years after my parents’ wedding, Betty gave birth to a second son, Brian. I was born that same year and have a 1954 photo with Brian, when we were two years old. Also, in that photo, is his 13-year-old brother, Robert. Shortly after that photo was taken, my father, the Scoutmaster of Troop One in Miami, was arrested, along with his assistant Scoutmaster, and accused of molesting boys within their troop. Three charges were brought against the assistant Scoutmaster, but only one charge was brought against my father. The one who brought forth that charge, was my uncle, husband to Betty, and father of the victim, my cousin, Robert.

I turned three years old, as my dad awaited trial, in the jail above the Dade County Courthouse. The charge, in my dad’s words, was eventually “wiped out,” and yet, we still left Miami, after the scandal, and relocated to Tennessee. I learned of his crime recently, which helps to make sense of why we never had contact, to my knowledge, with my aunt Betty and her family.

My only encounter with Betty came after my grandmother passed away in 1972. My mother and I, along with my aunt Bobbye, made the trek to Miami, to sort through their childhood home as we prepared for it to be sold. June had passed away the previous year, so the estate was left to the three remaining daughters. Betty joined us for just a couple of days, and asked for very little. She then left everything else for Bobbye and my mom to divide. 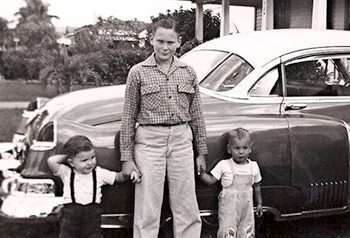 I immediately connected with my aunt Betty and enjoyed having that brief time with her. This was long before I knew of the accusations against my dad, his trial, or the death threats her husband had made against my father. All I knew, was how much I enjoyed being with her. I asked my mother, the same question I had asked through the years – I wanted to know why Betty, and my cousins, had not been a part of my life. I received the same answer as always, that my dad and my uncle did not get along.

Those two days, with my aunt Betty, would be my first and last. My mother shared with me that Betty eventually divorced her husband, which makes me wonder now, if the strife caused by my dad’s actions had finally taken their toil on her marriage. In 1981, Betty passed away, at the age of 58 – the same age that my mother would lose her battle with cancer, four years later.

I reached out to my cousin, Brian, as soon as I learned of the events of 1955-56, but never received a reply. And then, when I located the widow of my cousin, Robert, I asked her to speak with Brian on my behalf. She tried, saying Brian replied that he was well aware of everything that had happened and had no desire to ever have contact with me.

“The sins of the father are to be laid upon the children.”
– William Shakespeare, The Merchant of Venice