And Then There Were None Part 1

My mother had three sisters and my dad, two. In May, the last of my five aunts passed away. Each one was special, in their own way, and each left me with wonderful memories. Please allow me to introduce, Betty, Joyce, June and Bobbye, the Broadway sisters. 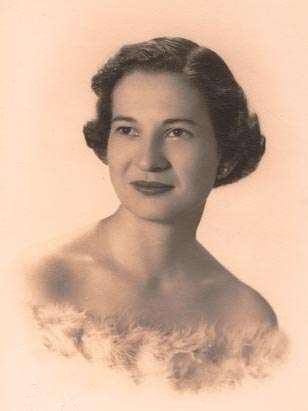 June was the third girl born into the Broadway family. She was not only, the first of my aunts to pass away, but also the youngest, at only 41 years old. I have very few memories of June but they are fond memories.

My grandmother’s home in Miami had a large upright piano in the living room, placed between two chairs, that were draped with throws. Across from the piano sat the Davenport, as my grandmother would call the sofa. The ivory keys had yellowed and the veneer was cracked and chipped – but the piano was always kept in tune. On top of the piano were assorted family photos. The one of June, taken by a professional photographer, captured her bare-shouldered beauty, with a hint of marabou feathers. I always thought she looked like a movie star.

I don’t remember June, from when we lived in Miami, but in my defense, I was three years old when we moved away. I know she had been married but that it had ended in divorce four years later. I also know she remarried and, at some point, moved out of the country. I don’t know where, why or for how long and unfortunately, there is no one left to ask. I have always assumed she was somewhere in the Orient, because she sent my grandmother a gift of small ivory Chinese figurines, that sat on a “what-not” shelf hung over the TV. 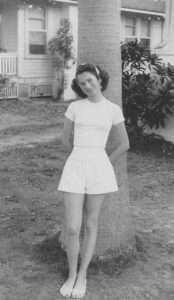 When I was in junior high, June moved back to Miami. I got to see her on one of our trips to visit my grandmother. June’s home was a small, Spanish-style, stucco gem, that had a porch accented with rope columns. The interior was filled with treasures she had collected and shipped home. Hand-carved lacquered tables, Oriental screens and sculptures, like I had never seen, fascinated the novice designer in me. I only saw her home that one time, but I still hold clear that memory from 50 years ago.

As if that wasn’t enough, June volunteered as a docent at the palatial Vizcaya Museum and Gardens, the former villa of James Deering. The Mediterranean Revival estate is on Biscayne Bay in the Coconut Grove neighborhood of Miami, Florida. Many of you might recognize it from various movies and television shows. I had been to the home/museum before, but now, with my aunt June working there, I was able to see rooms that were closed off to the public. I felt as if I had hit the trifecta – design, architecture and elaborate gardens!

I will always remember my aunt June, for her “movie star” photo, her exotic furnishings, and my own personal tour of one of the most fabulous homes in the world. I will try not to dwell on the mystery as to why she had been so absent in my life.

When I was in my second year of college, June developed a brain tumor. I regret that I never had the chance to really get to know her. My mother flew to Miami, to be with my grandmother, for the funeral. No parent should ever have to bury their child. Although everyone is gone, I still have those wonderful memories, along with the beautiful ivory Chinese figurines – and a few photos, including the one that, as a child, made me think my aunt was a “movie star.”