“Nothing brings to life again a forgotten memory like fragrance.”
—Christopher Poindexter

It was a hot summer afternoon and I had just completed the task of mowing the vast hillside yard of my childhood home. I was sixteen years old and remember when I reached the point where the yard met the street, my mother’s deep turquoise 1966 Cadillac Sedan DeVille turned into the drive. The car stopped and the power window eased it’s way down. She smiled and asked if I wanted a ride back up the hill. I turned off the mower and walked around to the passenger side and got in. Although she had been at work all day, she looked as fresh then as when she left that morning. The cold air was pulsing from the vents and the car was fragrant with the smell of her perfume. She was like a mirage – almost too beautiful to be real.

I can remember as a child a cobalt blue bottle of Evening in Paris perfume sitting on a mirrored tray in her bedroom. A few years later, the empty bottle was tucked into a dresser drawer. I never knew the significance of that treasure until a couple of years ago when I read letters exchanged between my parents while they were apart. It seems that my father had given my mother this perfume when they dated and again for their ninth wedding anniversary – which at that time, he was in jail awaiting a court date for a crime he may or may not have committed. He arranged for a family friend to purchase a card and a bottle of the perfume to give to my mother for their anniversary. I can remember an empty bottle of Evening in Paris perfume being discarded when it came time to clean out the house for an estate sale after both parents were gone. It breaks my heart that I did not know at the time the importance that bottle held.

Fragrance can trigger memories of people, places and times in our life. The 1938 men’s cologne Old Spice still makes me think of my grandfather. And the perfume, L’Air Du Temps, first introduced in 1948, reminds me of my mother who wore in later years. 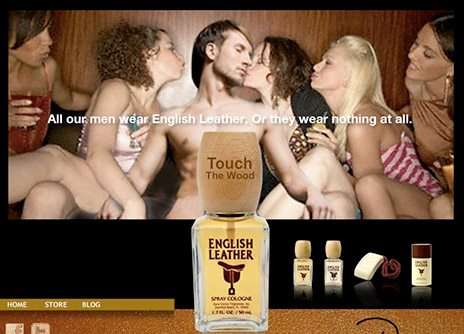 My first cologne was English Leather and I was probably no more than 14 or 15 years old at the time. I’ll admit that I found myself a bit excited by their advertising slogan: All our men wear English Leather. Or they wear nothing at all. In 1968 their companion fragrance, Timberline, was introduced and my favorite brown suede fringed jacket smelled like a Balsam tree at Christmas because of my generously applied cologne. Other popular men’s colognes came on the scene such as Brut, Aramis and Hai Karate, however by 1972 I had moved on to Pierre Cardin, which I wore for several years.

As an adult, I enjoyed finding new perfumes to give my mother. One of my favorite scents was the very floral Lauren, introduced by Ralph Lauren in 1978. A variety of perfume bottles sat on her vanity and remained there for many years after her death. I think my father also enjoyed the precious memories that each one of her fragrances would evoke.

These days I rarely wear cologne because I find some men bathe in their fragrance to the point where it can take your breath away. And then there are those that splash it on by pouring it into their hands. This leaves a lingering reminder once they have gone simply because they shook your hand. However, I do still love perfumes and colognes. In fact, I have a guilty pleasure of saving fragrance samples torn from magazines which I apply to my wrist each night before bed. I find that sometimes in the middle of the night, I’ll catch just a whiff and be transported back to that air-conditioned car on that hot summer day with my beautiful mom.